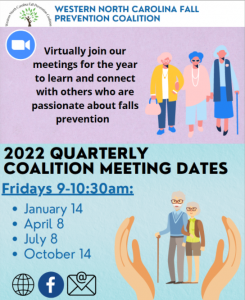 Are you interested in being a member of the Advisory Council for the WNC Fall Prevention Coalition? Our Advisory Council meeting dates and times are below.  Send us an email with your interest and county(s) you would want to represent! 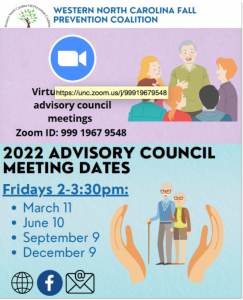 Interested in learning more or being a member of the WNC Fall Prevention Coalition?

Include your name, organization and which committee you are interested in supporting. 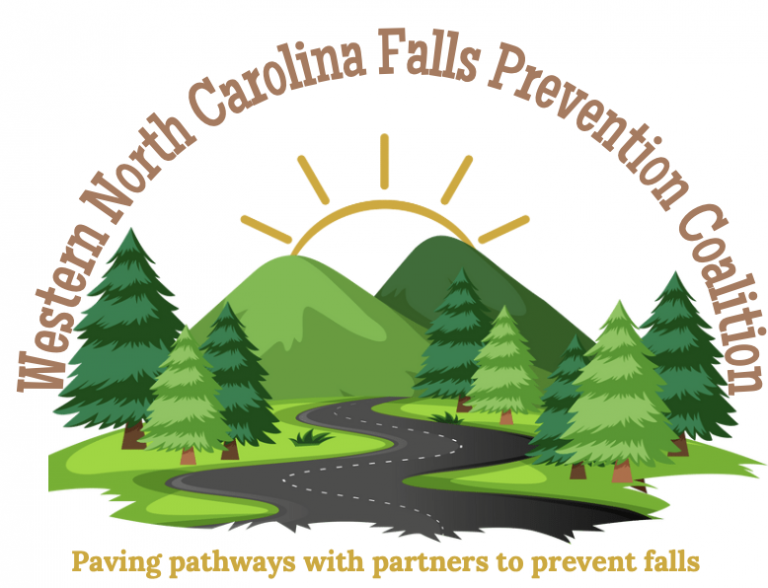 The WNC Fall Prevention Coalition is committed to reducing the number of falls and fall-related injuries in Western North Carolina.

2010 – Rebecca Chaplin from the Area Agency on Aging served the WNC Falls Prevention Taskforce as the first chair until 2014. At the first meeting, the following committees were established: Community Awareness & Education; Provider Education; Community Screening & Referral; and Advocacy for Supportive Policies & Environments.

2014 – Stephanie Stewart, from Land of the Sky Area Agency on Aging, became the WNC Fall Prevention Taskforce chair. The taskforce conducted monthly lunch meetings at Mission Hospital in Asheville with the following subcommittees:

1. Community Awareness and Education: to develop marketing materials to engage and inform the public about fall risks and proven strategies to reduce falls,

3. Provider Education: to identify, develop and implement training programs for both clinical and community providers raising awareness about falls prevention, and

During this year, the WNC Falls Prevention Taskforce grew to eighty-two individuals listed as members.

2016– Heather Bauer, with Home Instead Senior Care and Ayden Jones, NCHWC, became the Co-Chairs of Western NC Falls Prevention Coalition until the end of 2017 with monthly meetings at MAHEC.

2018- In 2018 WNCFPC partnered with Mission Hospital to host the coalition quarterly meeting in person and  with their WebEx service allowing members to attend virtually( pre- COVID ).  Cynthia Moses, PT and an advisory transition committee began meeting with consultation from Ali Climo, PhD from Healthy Aging Buncombe County.   The coalition did not meet from March 2018 until November 2018 during this transitional period in an effort to strengthen the coalition.

2020 – In March of 2020 WNCFPC held the 2nd annual Fall Prevention Spring Conference with continued partnership with MAHEC which was held both live with limited seating and virtually due to the COVID 19 Virus Pandemic.  WNCFPC Quarterly meetings transitioned from in-person to a virtual platform due to the COVID 19 Virus pandemic. In October 2020-Stephanie Stewart from Land of the Sky Area Agency on Aging became the Western NC Falls Prevention Coalition Chair until November 2020, Martha Zimmerman, PT became the chair.

2021 – In January, Jennie Rhyne, PT joined Martha Zimmerman, PT became Co-Chairs of the WNCFPC. During the spring of 2021, Morgan Wilson, MPH from the NCHWC at UNCA became WNCFPC Secretary and began hosting the quarterly meetings via Zoom. The WNCFPC had their first 2 student interns obtained from the COVID Service Corp during the summer of 2021, Michael Bidstrup, a recent UNC-CH Statistics graduate and Divya Venkataganesan, 2nd Year MPH at UNC-CH.   New Advisory Council members were recruited to provide representation the nine coalition counties of: Buncombe, Haywood, Henderson, Jackson, Madison, McDowell, Polk, Rutherford, and Transylvania and at the end of 2021 the 5 additional counties were added Cherokee, Macon, Swain, Clay and Graham counties.

2022 – Divya Venkatganesan, MPH joined us as secretary as Morgan Wilson finished up her term in Dec. 2021.   Divya is managing our Facebook page and is chairing the Communication and Membership Committee; the Communications and Membership Committee created the first WNCFPC Quarterly Newsletter: The Balanced Broadcast. The coalition also developed our first WNCFPC 2022 Manual to share with interested parties that includes our new mission, vision and history, thanks to Weyland Prebor, McDowell Senior Center Director and committee chair. Brea Kuykendal, MHS from Land of the Sky, joined the executive committee as the Liaison to the NC Falls Prevention Coalition.  Sara Knapp, the chair of the research and data committee developed a PowerPoint presentation with regional and specific research data and presented to the Quebec Senior Center in Transylvania County with plans to create a coalition speaker’s bureau. September 9, 2022 is the date scheduled for the 4th annual Falls Prevention Conference with MAHEC thanks to Rosalyn Wasserman, PT. 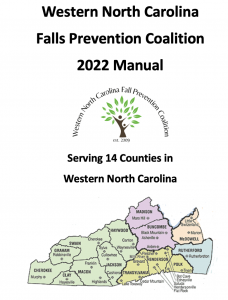 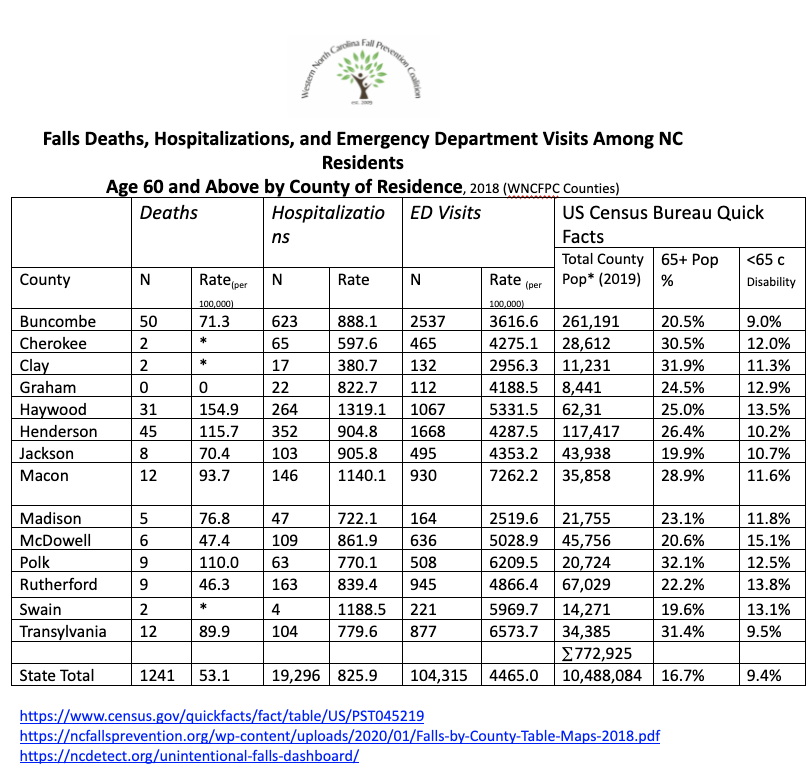 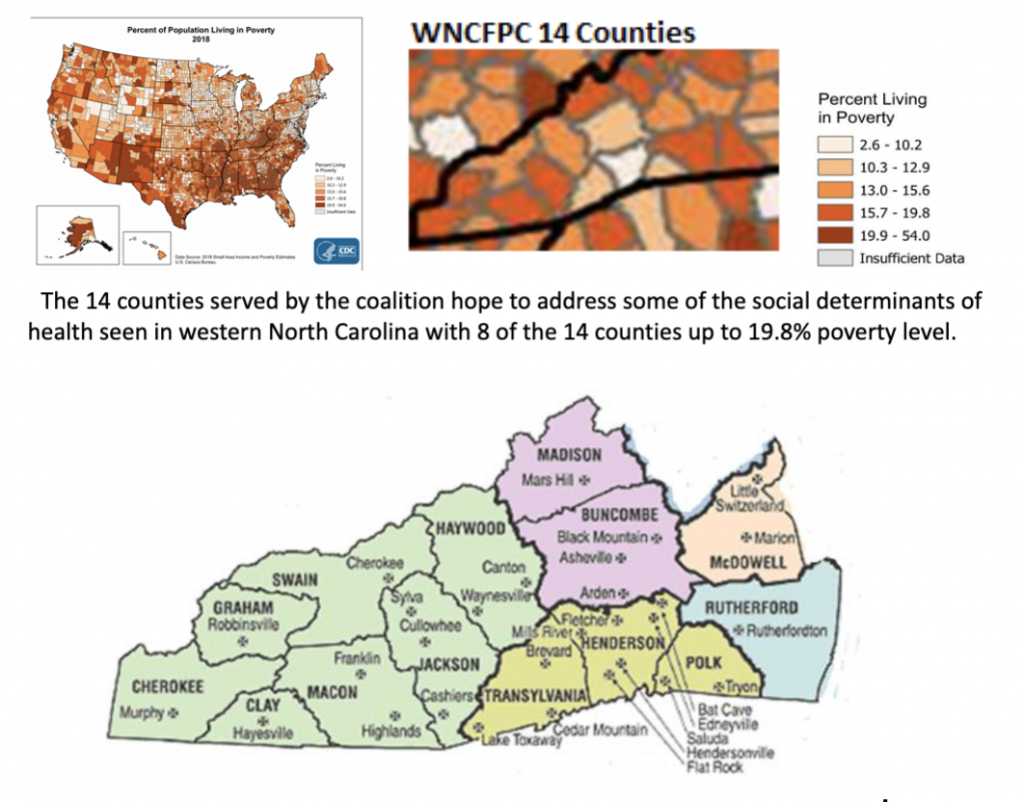 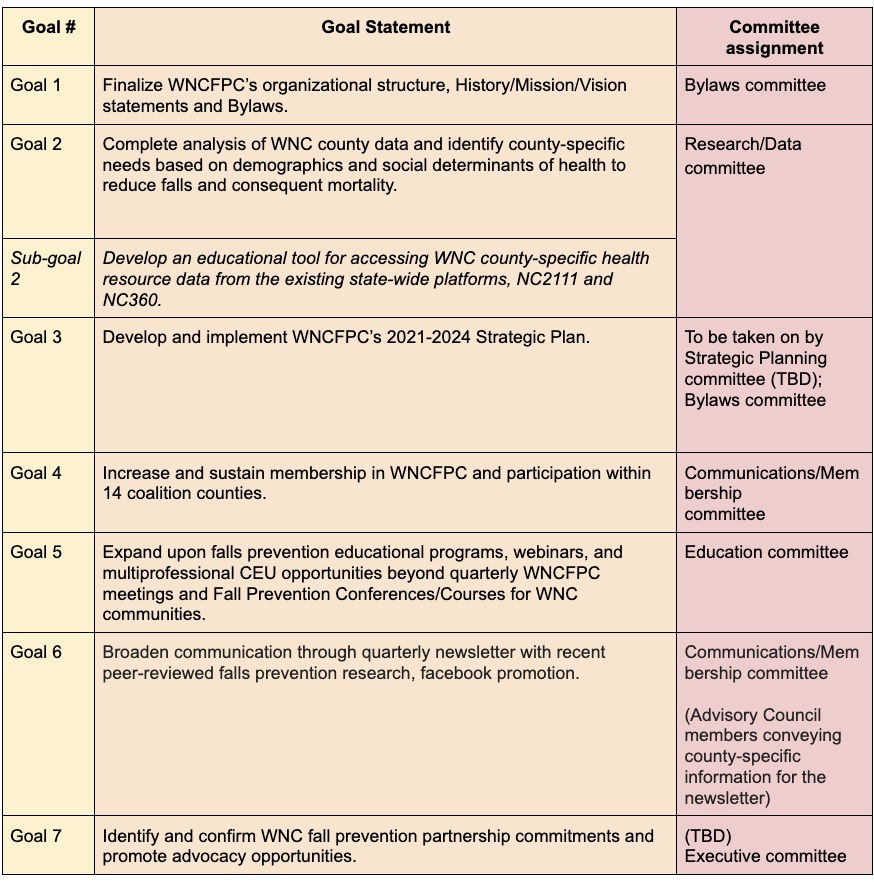